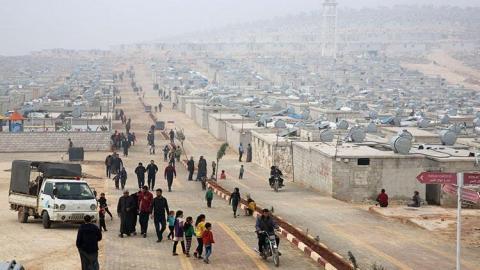 Turkey has established a new residential region in Syria's northwestern province of Idlib to host all the Syrians displaced from their houses amid the civil war in the country that has been going on since 2011.

The construction of some 30,000 out of the planned 50,000 brick houses in the Meshed Ruhin village, some 5 kilometers away from the Turkish border, has been finished, with some 180,000 Syrians having already started living in Idlib's "new city."

According to the UNHCR, there are 6.2 million people, including 2.5 million children, displaced within Syria, the biggest internally displaced population in the world.

Idlib, which once had 1.1 million population, became a shelter for those displaced people due to its close location to the border as the population of the city skyrocketed to some 5 million recently.

Aiming to stop a new influx of Syrians to its soil, Turkey, which already hosts more than 3.6 million Syrians, rolled up their sleeves to build a "new city in Idlib" last year.

With Turkey's Disaster and Emergency Management Presidency (AFAD) and the Red Crescent's massive efforts, some 30,000 brick houses, a school, a hospital, and parks for children, a small mall and a center for women have been constructed in short time.

Some 180,000 people living in the tents started accommodating in Idlib's "new city" as officials highlighted that some 20,000 more briquette houses will be constructed in the near future.

"Turkey has been conducting a huge operation in Syria - which the whole world turns their back and deaf ears to," Kerem Kınık, the head of Turkish Red Crescent said on Nov. 28.

"We built houses. People are living in properties they call 'our houses.' They feel safer now," he added.

At least seven terrorists neutralized in Syria, Iraq
The Most Dangerous Airspace To Fly Through (infographic)