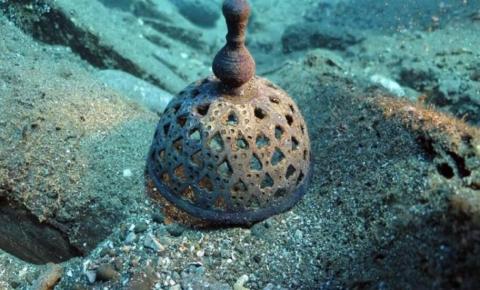 The ongoing excavations and research works in the seas of Turkey, where the world's first scientific archeological underwater excavations were carried out, have unearthed 255 artifacts this year alone.

Turkey's journey of underwater excavation and research started in 1960 with the excavations of foreign teams in the Bronze Age Gelidonya Shipwreck near Antalya's Finike district on the Mediterranean coast.

Discovered as part of 10 projects, a total of 255 artifacts have been handed over to Turkish museums so far this year.

Özdaş, who is also an archaeology professor at the Institute of Marine Science and Technology at İzmir Dokuz Eylül University, said that shipwrecks lie at depths varying between 30-60 meters and each meter descended during the dive is a journey to the past.

"When you reach the shipwreck, time seems to freeze," he said. "All of the shipwrecks are like a time capsule that no living thing has touched. This is a great happiness for me as a person who is engaged in both sea and archeology a profession."

Özdaş also said he worked on photographing underwater shipwrecks and creating photo mosaics as part of the Shipwreck Inventory Project.

Due to the weather conditions and the shipwrecks' locations, he said, researchers do not have much time under water most of the time. "Because ships do not sink in places where you can dive very easily. We can perform three dives on each wreck."

Özdaş also underlined that they identified a large number of ships belonging to the Ottoman era, especially in İzmir as well as central and northern Aegean regions.