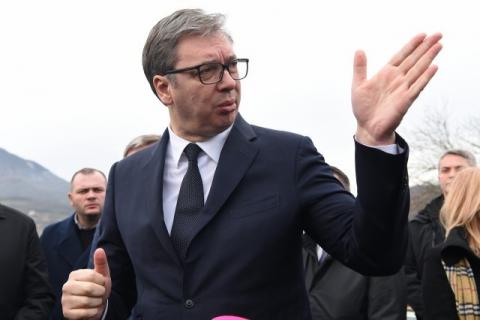 "I did not sign the law on expropriation, and I did sign the law on the referendum when I returned from Sochi," said Vui during a tour of the works on the Milo Veliki highway in aak.
"I'm waiting for a lawyer's opinion," he explained.
Speaking about the incident in Sabac, Vui said that the driver of the excavator did not injure anyone and is currently in the hospital.
"He suffered serious bodily injuries," President of Serbia stated, adding that the driver of the excavator was "killed". Vui pointed out that "all the Zelenovi thugs" were there. He pointed out that Zelenovi occupied the bridge with machines and "climbed on tractors". "And who are you to ban him from leaving the assembly of the municipality of Sabac? Under what law? It is pure crime. Who do you think you are to prevent honest and normal people from going anywhere? Did you get permission for that?" Vucic asks.
"The man liked not to hurt anyone. What are you, gods?", The President of Serbia explained.

"Where does it say that?"

Vui asked according to which law and constitution roads can be blocked.
"Civil disobedience - all right, but in accordance with the law. Where does it say that? In the 'Comandante Mark' comics. Whether you are obedient or not, you can do whatever you want, you have to abide by the law. My advice to the police is to let you behave illegally", Vui pointed out and stated that the opposition was not surprised by the results of the elections on April 3.

When asked to comment on the writing of the Croatian media that he sent the excavator to people, President of Serbia said that he was not...