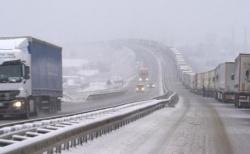 Traffic on the Hemus highway in the direction of Sofia is temporarily restricted for all cars and trucks after the snow has fallen due to the need for cleaning.

Nearly 100 trucks are stuck between the second and third tunnels of Hemus in the direction of Sofia due to the snowfall. The road to Varna is being cleaned. In the opposite direction, the processing is difficult due to the stuck trucks.

The passage of the Republic is already cleaned and passable in winter conditions. During the day, a temporary difficulty for the traffic through the Stara Planina pass is expected due to the withdrawal of the Romanian bus that caught fire last night in the area of ​​Gurkovo and the withdrawal of a crashed truck in the northern part of Veliko Tarnovo region.

Traffic on the road Troyan - Karnare, in Troyan Pass, is temporarily restricted for trucks over 12 tons due to snow removal.

Snow is also falling on the high parts of Smolyan district. The largest snow cover is in the region of Dospat - 7-8 cm. It is smaller in the passes Rozhen, Pamporovo and Prevala, which are passable in winter conditions.

More than 15 centimeters of snow fell tonight at the Gueshevo border checkpoint for North Macedonia. The road is cleared. A column of trucks and cars had formed this morning on the Struma highway near the bridge over the village of Dyakovo on the highway. The route has already been cleared and traffic is now normalized.

The first snow caused traffic difficulties through Shipka, where an accident between two cars occurred earlier this morning. There is also a stuck truck in the passage, which according to the duty officer at the Regional Road Administration has summer tires. The movement is not limited, it is carried out with increased...