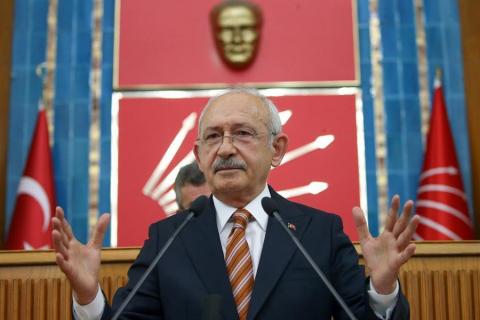 "If you are against interest, let him offer you, you will erase the interest debt of the farmer and the tradesman," the CHP leader said, calling on President Recep Tayyip Erdoğan, who is advocating against high-interest rates.

Recalling Erdoğan's recent statement that Turkey is in an "economic independence war," Kılıçdaroğlu said, "You are fighting a war of independence in the economy, but who brought the country to this point? Was the CHP ruling this country for 19 years?"

"It's easy to criticize, but we'll still make suggestions as the leader of a responsible party," he said. If the government really wants to wage a war of independence in this country, the CHP lists five items for them, he added.

Kılıçdaroğlu proposed to gather the economic social council immediately and ask the arguments of the tradesmen.

"You will immediately issue a circular and say that you are putting an end to waste in the state," he stated.

If the government really wants to wage a war of independence in the economy, it must say that all the money agreed for construction and usage guarantees must be turned from foreign currency to Turkish lira.

"You will avoid injustice. You will come out and say, 'The religion of the state is justice, I will do whatever is necessary, whoever opposes justice in this country will find me," the CHP leader said.