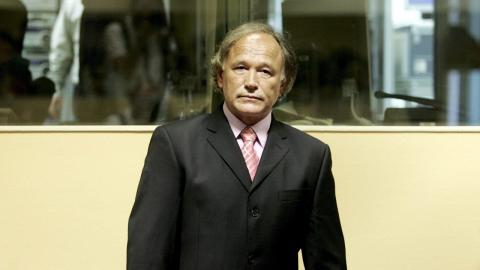 The UN's Mechanism for International Criminal Tribunals in The Hague has rejected an application for early release from prison from former Serbian Interior Ministry official Vlastimir Djordjevic, citing serious concerns about his level of rehabilitation.

The president of the Mechanism for International Criminal Tribunals, judge Carmel Agius, said in his decision, which was published on Tuesday, that while Djordjevic "has demonstrated some level of rehabilitation… the high gravity of crimes militates very strongly against his early release".

"Moreover, there are serious concerns as to whether Djordjevic has been sufficiently rehabilitated such that, if released early, he could be trusted to comply with any necessary conditions," Agius said.

The Hague Tribunal sentenced Djordjevic to 18 years in prison in 2014 for the persecution and deportation of ethnic Albanian civilians during the Kosovo war and for assisting in the concealment of the bodies of war victims who were killed by Belgrade's forces.

Agius said that "the high gravity of his crimes is amply demonstrated throughout the judgments in his case, and this factor weighs very heavily against releasing Djordjevic early".

He noted that the German prison authorities initially indicated that Djordjevic's behaviour in prison "gave no cause for complaint", but that this assessment "changed quite radically earlier this year".

"In this regard, the German authorities reported that Djordjevic had tried to contact another prisoner with a background in organised crime, leading to security concerns serious enough to warrant Germany transferring Djordjevic permanently to another prison with a higher security classification," Agius explained.

Details about the German...