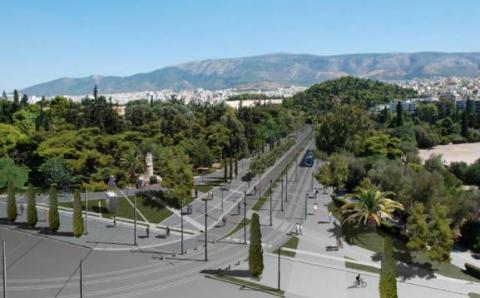 The architectural study for the renovation of Vasilissis Olga Avenue was approved yesterday by the Central Council of Architecture of the Ministry of Environment and Energy. The project is the "core" of the plan to unify the archaeological sites of Athens, which is expected to be completed with the implementation of the new Great Walk brought to the fore by the Municipality of Athens, in mid-2020, mediating the pandemic and the need of citizens for free places.

This project has a long history, as it was included in the old program of unification of the archaeological sites of the capital, which was never completed. In 1983, it was included by the then Ministry of Environment, Physical Planning and Public Works in the Athens Master Plan, which was finally approved in 1985 (under the ministry of Antonis Tritsis). Two years later, in 1987, the Ministry of Culture completed the strategic plan (masterplan study) which demarcated the intervention area.

Various studies followed, until in 1995 the Society for the Unification of Archaeological Sites of Athens (EAXA) was founded, which marked the beginning of the implementation of the ambitious plan of drastic intervention, on a large scale, in the public space of the city center. At that time, the Great Promenade included the Shopping Center, the areas of Psyrri, Metaxourgio, Plato's Academy, Thissio to Kerameikos and Gazi, Plaka, Apostolou Pavlou and Dionysiou Areopagitou, Vasilissis Olgas, Ardittos, and Mets . Of the few projects that were finally completed, the most emblematic is the large pedestrian street of Apostolou Pavlou and Dionysiou Areopagitou.

In 2010, the "Athens-Attica 2014" plan of the then PASOK Minister Tina Birbilis included the completion of the "Great Walk" from the Olympion to...