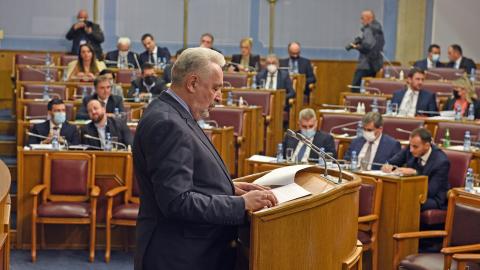 The date for the session at which the motion will face a vote has not been set yet but if it is to succeed, the opposition needs to get at least one MP from the majority camp to back it.

"The government has brought the country to a state of complete political and institutional paralysis, which is why it is unable to respond to the real needs of Montenegrin citizens, demands for reforms and the expectations of our international partners," the opposition parties said in a joint statement.

"By its irresponsible behavior, the government has halted Montenegro's European integration," it added.

The government led by Krivokapic, was elected on December 4, 2020 by 41 votes from the pro-Serbian For the Future of Montenegro bloc and the Peace is Our Nation and Black on White coalitions.

The three opposition blocs won a slender majority of 41 of the 81 seats in parliament August 2020, ousting Djukanovic's Democratic Party of Socialists from power.

Krivokapic's so-called expert government, comprising 12 ministers who have no political party affiliations, was the first in three decades not to be run by the Democratic Party of Socialists.

It has been criticised by the opposition for the lack of results in the country's ongoing negotiation process for EU membership, and for supporting the Serbian Orthodox Church.

Ines Mrdovic from the NGO Action for Social Justice said on Tuesday that is unlikely that the...