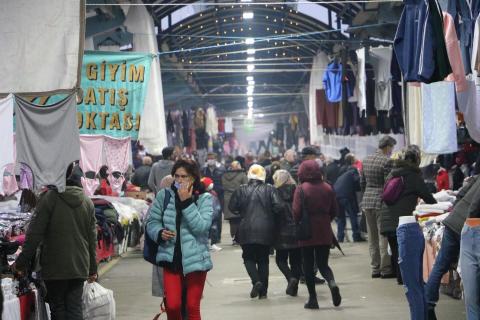 Edirne, a northwestern province of Turkey located near the Bulgarian and Greek borders, seems to be having one of the best times of this year with its exciting social activities and tourists densely flowing into the city.

More than 25,000 people flocked to a coffee and chocolate festival held in Edirne during the weekend, bringing coffee lovers to an event where they can sip on different kinds of coffee and taste delicious chocolate products.

The event took visitors on coffee's historical journey through time with information, activities and samples of past and present-day delicacies based on the feelings and living spaces created by coffee.

The festival also included stands of the popular coffee shops in the country, various workshops and seminars for those who want to be a barista of their own home and concerts by famous musicians.

Edirne has been a top destination for thousands of Greeks and Bulgarians who flock there on the weekends for shopping, making a considerable contribution to the city's economy. But, the sudden rate changes in the Turkish Lira against foreign currencies have increased these visits even more.

Nearly 1 million Bulgarian nationals entered Edirne from Kapıkule and Hamzabeyli Border Gates with their private vehicles and tour busses so far in 2021, according to data obtained from sources.

With the volatility in the exchange rate that led to the lira to decrease sharply, tourists started to benefit from competitive prices and meet all their needs from Turkish...