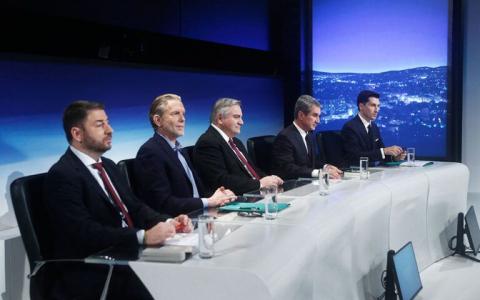 Who won the debate between the five candidates [the sixth, former PM George Papandreou, refused to participate] for the leadership of the KINAL (Movement for Change)?

The first answer came from the social media. There are no posts that refer to any candidate as the winner or to a memorable turn of phrase by any of them in an attempt to corner his opponents.

Perhaps that is why after the debate ended candidate Andreas Loverdos declared [the old slogan of PASOK, KINAL's precursor] that, "PASOK is here, united and strong."

Neither of the two candidates that are viewed as frontrunners - MP Loverdos and MEP Nikos Androulakis - appear to have gained points as a result of the debate.

On the other hand, the other three candidates, who have been polling much lower in recent surveys - Pavlos Geroulanos, Pavlos Christidis (who illustrated his positions with insightful examples) and Haris Kastanidis - gained points.

They showed that their electoral performance as reflected in polls do not match the quality of their political rhetoric and of the positions that they express regarding the party and the country.

Will these extra points have an impact on the party leadership election? Nobody can say.

In general terms, one might say that the derby of the debate was played in centre-field. The participants did not opt for an aggressive game plan, but instead took care not to lose points.

The favourites for entry into the second round (Loverdos...