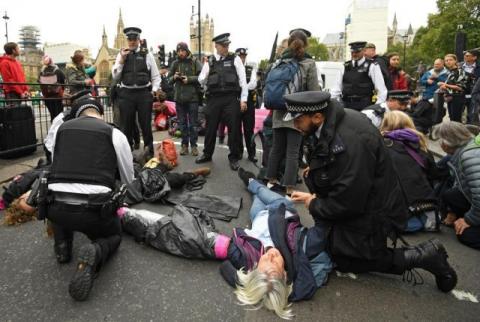 The epilogue of the protest was mass arrests and prison sentences for protesters who disturbed public order and peace.
Members of the "Insulate Britain" association have repeatedly blocked the M-25 and M-11 motorways, one of the most important roads, which are essentially bypasses around London. In the city, they blocked the roundabout on Old Road, and thus prevented the citizens from moving freely", Novosti" reports.
Police forces arrested dozens of people during every protest, in the same time launching investigation that included interviews with the citizens who were late for work due to the roadblocks, who were prevented from going to medical check-ups, and attend other activities crucial for them, all with the aim of punishing the demonstrators.
In response to Insulate Britain protests, the government said: "People's day-to-day lives should not be disrupted, especially on busy motorways where lives are put at risk and resulting traffic delays will only add to vehicle emissions.
Nine people were sentenced to prison terms due to the last protest in a row. Two of them were sentenced to three months in prison, while Ben Bus (36), Oliver Rock (41), Emma Smart (44), Tim Spears (36) and James Thomas (47), all received four-month sentences. Ben Taylor, 37, was sentenced to six months in prison.
Four days after that verdict, on October 21 this year, the British police arrested as many as 124 people, out of a total of 250 who blocked the Lambeth Bridge in support of the convicts.
Observing similar protests, it can be seen that in Britain, the practice is to detain people who took part in the protests, especially those who block roads and restrict the freedom of movement of others.
Thus, on August 30, 11 people were arrested who...