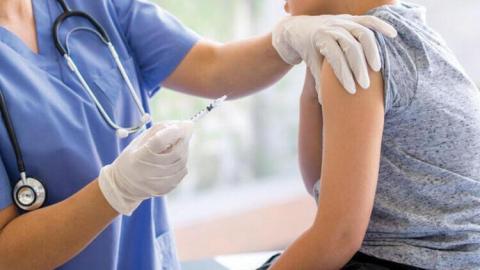 Turkey is not presently considering imposing lockdowns or other stricter measures despite the emergence of the new COVID-19 strain, Omicron, Health Minister Fahrettin Koca has said, renewing calls for the public to get vaccinated and adhere to basic anti-virus rules, noting that millions of people are still not fully protected.

"We know that the vaccine works that's why we have been repeatedly urging people to receive their shots. Besides, people must follow all other rules, such as wearing face masks, avoiding indoor places and social distancing. Lockdowns are not under consideration," Koca told reporters on Nov. 30 following a central executive committee meeting of the ruling Justice and Development Party (AKP).

He reiterated that no cases of the Omicron variant have been detected yet in Turkey.

The minister later in the day once again took to Twitter to express frustration over the slow pace of the jab drive.

"Despite the fact that it is widely known that one dose of the vaccine is not enough and despite repeated warnings, 5.2 million people have not received their second doses," Koca tweeted.

The outlook is even grimmer when it comes to the number of people who have been given the third dose of the jab, according to the minister.

"As far as the third dose is concerned, we are far below the expected level. Only 12.2 million people have received the third of the vaccine, which correspond to 20 percent of the adult population," he wrote.

Koca also said he expected authorities to approve the application for the emergency use of the locally developed COVID-19 vaccine by the end of the year. "This may happen toward mid-December," he noted.

Meanwhile, Koca met virtually on Nov. 30 with the European...