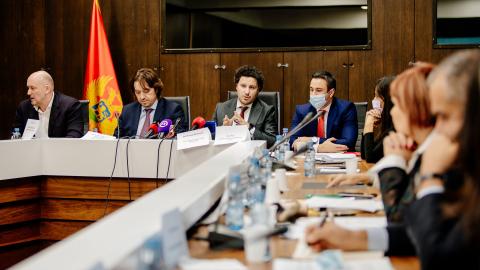 Montenegrin government officials at the public hearing on the Law on Confiscation of Proceeds of Crime. Photo: Government of Montenegro

The Ministry for Justice, Civil and Minority Rights put the law amendments to a public hearing on October 27, announcing it as major breakthrough in fighting organised crime and corruption.

But the Supreme State Prosecution Office has called for additional consultations with government before the amendments are put to parliament for a vote.

"The proposed deadlines for conducting investigations are too short and we believe that the administrative capacity of the prosecution for this process should be further analyzed," the Prosecution said in its comments.

Under the amendments, the State Prosecution should form financial teams to examine suspect property, while civil proceedings are initiated to confiscate suspectedly illegally acquired property until the owner proves how he or she acquired it.

The amendments say Illegally acquired property should be frozen when a financial investigation is launched, and access to bank accounts in the country and abroad should be provided.

But while the amendments propose launching a draft investigation if the value of the property in querstion exceeds 50,000 euros, one of the country's most prominent watchdogs, MANS, said the value should be set at a minimum of 100,000 euros.

"We suggest that the illegal enrichment of public officials be criminalized, which will lead them to report their property accurately. This will make it easier for the prosecution to set priorities and reduce selectivity in investigations," MANS said in its comments.