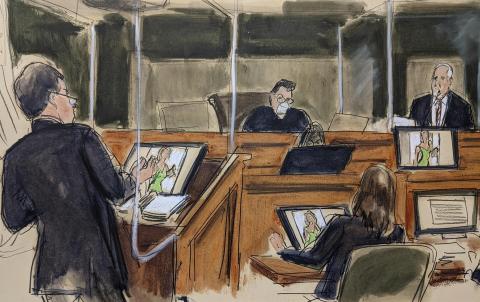 Lawrence Visoski, who worked for Epstein for nearly 30 years, said he was told when VIPs would be aboard because "you'd want to make sure the plane looked nice."

Maxwell, the 59-year-old daughter of the late newspaper baron Robert Maxwell, is accused of procuring underage girls who were sexually exploited by Epstein.

Epstein committed suicide in a New York prison in August 2019 while awaiting trial.

The British jet-set socialite and heiress has pleaded not guilty to six counts of enticing and transporting minors for sex that could send her to prison for up to 80 years.

Epstein's VIP passengers, including on flights to his luxury properties around the world, had been previously reported, but Visoski gave further details as the government's first witness at the trial.

He said that he never saw any sexual activity on the planes, but that the cockpit door was always closed in flight.
"I certainly did not," he said when asked if he witnessed sexual activity with minors.

Visoski, who worked as a pilot for Epstein from 1991 to 2019, was also asked about a key witness who is being identified only as "Jane" and is testifying against Maxwell.

Jurors were shown Jane's birth certificate but it was not made public. Prosecutors said she was underage during her contact with Epstein.

Visoski said he would sometimes see passengers boarding but he did not recall ever seeing anyone who looked...