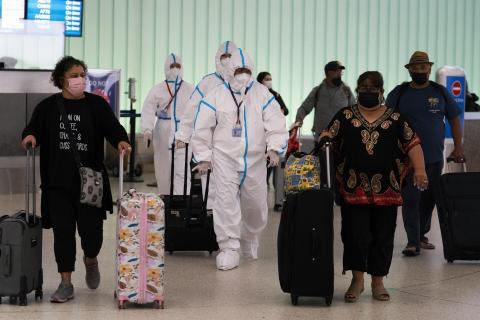 The WHO said on Nov. 30 that those not fully vaccinated against COVID-19 who are also vulnerable to the disease, including over-60s, should put off travel to areas with community transmission.

The World Health Organization also said blanket travel bans would not stop the spread of the Omicron variant.
The new COVID-19 variant of concern, which the WHO says poses a "very high" risk globally, has prompted many countries to shut their borders.

"Blanket travel bans will not prevent the international spread, and they place a heavy burden on lives and livelihoods," the WHO said in a travel advice statement on Omicron.

"In addition, they can adversely impact global health efforts during a pandemic by disincentivising countries to report and share epidemiological and sequencing data."

First reported to the WHO less than a week ago after being detected in southern Africa earlier this month, Omicron has already appeared in several countries.

The WHO noted the increasing number of governments introducing travel measures, including temporarily banning arrivals from countries where the variant has been found.

The WHO said that as of Sunday, 56 countries were reportedly implementing travel measures aimed at potentially delaying the importation of the new variant.

"It is expected that the Omicron variant will be detected in an increasing number of countries as national authorities step up their surveillance and sequencing activities," it said.

The WHO later issued a correction to the final part of that travel advice, relating who should be advised to postpone travel, and to where.

"Persons who have not been fully vaccinated or do not have proof of previous SARS-CoV-2 infection and are at increased risk of...