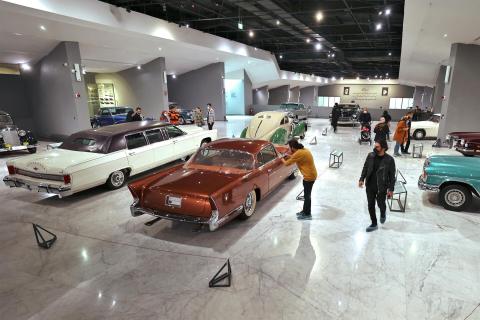 "We consider that these cars are part of Iranian cultural heritage," the museum director Mohammed Faal said.

"They belong to the people, not to the royal family."

It is run by the Islamic republic's Bonyad Mostazafan organization, "The Foundation of the Oppressed," which manages the confiscated property of the toppled regime of Shah Mohammad Reza Pahlavi.

The line-up is staggering, and includes a car combining a unique engineering collaboration.In 1972, knowing the shah liked German engineering, Mercedes, Porsche and Volkswagen teamed up to build an unprecedented automobile.

They created the "MPV Tehran," a bright orange painted single-seater, that was a "gift" to help crown prince Reza, who was then 12, learn how to drive.It has two keys. One, made of silver, limits the powerful engine to a gentle 30 kilometers per hour (18 miles per hour). The other, in gold, allows the vehicle to speed at 170 kph.

While the car hasn't raced since 1979, its sleek lines still inspire those who come to the museum.

Some 20,000 people have visited since its opening, more than the number of people who visit the national museum each month."I really like this place, because it brings together some of the rare things that remained after the revolution," said Farzaneh, a 55-year-old pensioner. "These objects take us through our history," she added.

Sprawling over more than a hectare (nearly...