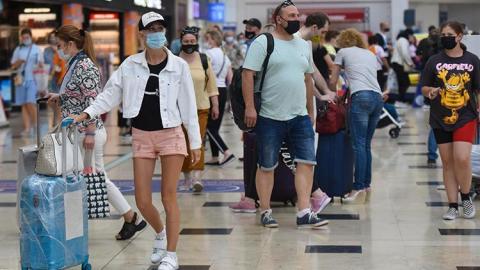 Antalya, on Turkey's Mediterranean's coast and which is very popular with local and international holidaymakers, attracted a total of 8.9 million foreign tourists between January and November this year.

This marked a staggering 163 percent increase from the same period of 2020 when the city hosted around 3.4 million international visitors.

"Despite the ongoing pandemic, tourism activity has been strong thanks to the Safe Tourism Certificate program and strict anti-virus measures hotels and other accommodation venues are implementing," said the Antalya Governor's Office in a statement.

Over the past 11 months most tourists arrived in the city from Russia. According to the governor's office, between January and November, 3.5 million Russians visited the city, which corresponded to 41 percent of all foreign tourist arrivals.

Also, nearly 1.3 million Ukrainians, 1.2 million Germans and 413,000 Polish travelers vacationed in the city during this period.

The statement from the governor's office particularly pointed to the significant interest from British tourists.

In November this year, more than 20,200 visitors from the U.K. arrived in Antalya, comparing favorably with the 19,000 British tourists that visited the city in the same month of 2019, when tourism activity was robust.

The country's Culture and Tourism Ministry has not yet released the data for foreign arrivals for November. The latest figures showed that more than 21 million foreign tourists visited Turkey between January and October, marking a strong 88 percent increase in the same period of 2020.