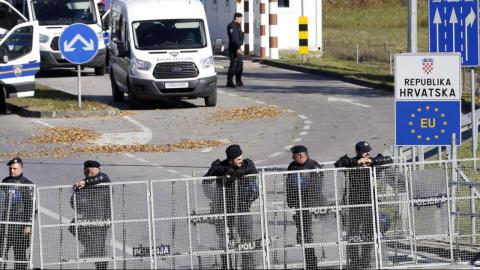 The report by the European Committee for the Prevention of Torture and Inhuman or Degrading Treatment or Punishment CPT contains the findings of its August 2021 visit to Croatia's border with Bosnia and Herzegovina aimed at examining treatment of migrants and safeguards afforded to them.

Highlighting difficulties in cooperation with Croatia authorities, CPT said that its delegation was provided with incomplete information about places where migrants may be deprived of their liberty, and was obstructed by police in accessing documentation needed for the delegation to carry out the Committee's mandate.

"The CPT delegation also carried out many interviews across the Croatian border in the Una-Sana Canton of Bosnia and Herzegovina, where it received numerous credible and concordant allegations of physical ill-treatment of migrants by Croatian police officers," the report says.

"The alleged ill-treatment consisted of slaps, kicks, blows with truncheons and other hard objects (for example, butts/barrels of firearms, wooden sticks or tree branches) to various parts of the body," it added.

Echoing the Council of Europe's message, a Zagreb-based NGO, the Centre for Peace Studies, said the Croatian authorities must take actions against those responsible for abuses.

"The government must take clear and unequivocal steps to stop the violence," Centre for...