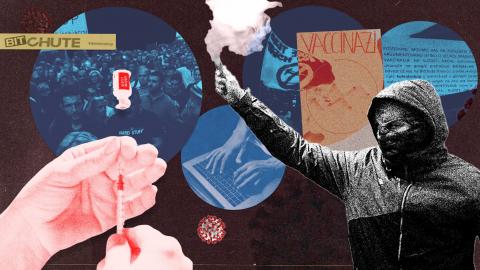 "BitChute refuses to implement even the minimal moderation standards they claim to adhere to, as their site is dependent on allowing the kind of hate speech and harmful misinformation that gets removed from mainstream video sharing platforms," Hope not Hate researcher Gregory Davis told BIRN.

And its influence has reached Bosnia.

According to research by BIRN, individuals sharing content from BitChute, including translated videos that claim the COVID-19 pandemic is fake and the vaccines dangerous, have also taken part in protests against COVID-19 restrictions imposed by authorities in Bosnia and elsewhere in the Balkan region.

In Serbia and Croatia, they have joined protests against migrants and refugees and LGBT rights.

Experts in violent extremism say that such groups are trying to exploit the anti-vaxxer movement to as a means to disseminate hate. According to a report commissioned by the European Commission and published this year, extremist groups are using conspiracy theories as a tool to recruit followers and spread radical agendas, abusing the insecurity, fear, socioeconomic problems and mental health issues of vulnerable individuals.

"Extremist groups capitalised on the opportunity by offering simple solutions and answers to highly complex issues with the aim to advance their agendas and recruit followers," the report said.

BIRN was unable to ascertain who distributed the flyers in Sarajevo.