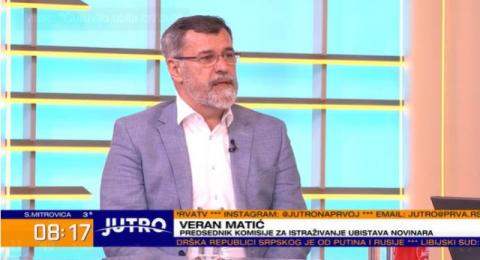 Matic pointed out that this was unequivocally proven by the trial, which ended yesterday in the first instance verdict of members of the State Security Service (SDB).
"On the same day he was killed, it was clear that the state was behind it because it had been destroying his newspaper for months prior to that. Curuvija was its target", Matic told TV Prva.
Matic pointed out that over time lots of evidence was destroyed, so it was really hard to reach the one who fired the gun indisputably.
"When it comes to those who ordered the murder, it is clear that it is someone from the top of the government, it is clear that the top of the government was Slobodan Milosevic and Mira Markovic. That is something that is evident. The investigation went into that direction but it is impossible, at this moment, to prove it, as they have died in the meantime ", stated Mati.
According to him, the defense will appeal the verdict, and probably the prosecutor as well. As he said, that means that the Court of Appeals should pass a final verdict.
Matic said that the murder of Curuvija sent a message to political opponents and journalists as to how they will fare if they continue to fight for independent journalism and democratic freedoms".
As he pointed out, he hopes that this procedure will "encourage" the Prosecutor's Office for Organized Crime to take over the case of the murder of journalist Milan Panti, because it is dealing with organized crime.
"The working group of the Ministry of Internal Affairs came up with evidence related to the identity of the killers," Matic said, stating that this was evidence related to the motive and the perpetrators. He said that journalists in Serbia are endangered and often serve as easy targets.
"The...