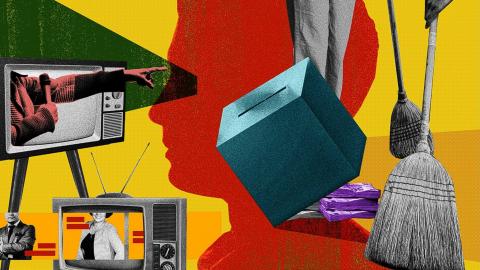 By analysing the airtime taken up by the 26 parties that have submitted their reports, BIRN determined that they aired advertising worth some five million euros. But the parties declared television advertising spending of some 685,000 euros.

Of that five million, according to BIRN's calculations, Rama's Socialists spent 2.3 million euros on advertising, but it declared only 379,000 euros.

Of 26 parties that have submitted financial reports so far, 15 claimed to have no revenues or expenditures for the election campaign at all. One of them is the Social Democratic Party, which won three seats in parliament.

"You can joke about it; you can say something like, 'Look, I spent 10 leks, while the large parties spent four million.' But it's impossible to claim no expenditures at all," said Gjergj Vurmo, an expert on governance and state capture at the Tirana-based Institute for Democracy and Mediation, a think-tank. "Zero it is not a possible number."

"They have no integrity at all," he told BIRN. "They use politics for their own interests."

Prime Minister Edi Rama prior to casts his ballot at a polling station in Tirana, Albania, 25 April 2021. Albanians head to the polls on 25 April to vote in the parliamentary elections. Photo: EPA-EFE/MALTON DIBRA

April's election would not be the first time discrepancies have been...

Week in Review: A Make or Break Year

Kosovo in 2023: Between ‘Crisis Management’ and ‘Conflict Resolution’