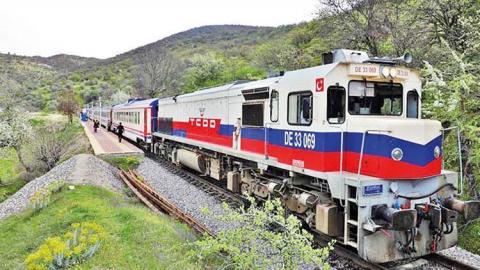 With the booming popularity of the Eastern Express that runs from the capital Ankara to the eastern province of Kars, authorities are encouraged to put new trains into service to meet the soaring demand of people trying to get to know the Anatolian hinterland.

The Eastern Express became highly popular after people started sharing photos of the picturesque scenery of their journey on social media.

In an effort to promote Turkey's culinary culture and introduce local flavors of different regions, authorities announced that they were making comprehensive preparations for new alternatives that would bring gastronomic tourism to the fore.

Ömer Kartın, the chairman for TÜRSAB's Gastronomy Tourism Specialization, shared details regarding their gastronomic tourism plans, giving information about the routes to be put into service.

Noting that they aim to start services between the Central Anatolian province of Kayseri and the southern province of Adana, two cities famous for their local delicacies, in the autumn of 2022, Kartın emphasized that they wished to increase these tours to two or three days a week.

"We think that these tours will attract the same attention as the Eastern Express has fetched in recent years. On these routes, tourists will travel through magnificent nature scenes while eating magnificent meals," Kartın said.

Drawing great attention from international tourists, local university students, and travel and sightseeing enthusiasts, the Eastern Express hosts passengers who like to enjoy delightful foods served while enjoying impressive natural and historic sightseeing along the way.

But, people trying to reach eastern Turkey by the Eastern Express can no longer find tickets, as photographers, tourists and...