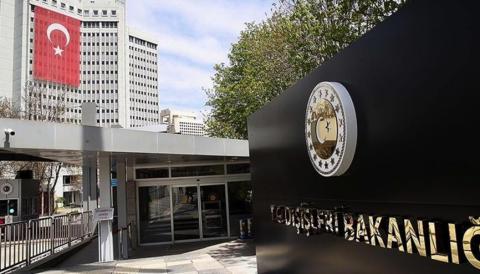 "We strongly reject the impertinent and unlawful statement targeting the territorial integrity of our country, which has been made by the regime's so-called People's Assembly which is devoid of democratic legitimacy and under no circumstances represents the Syrian people," said Bilgiç in a written statement.

He emphasized that such statements are also signs of the "delusional impasse" of the regime, which has been "oppressing its people for years [and is] responsible for the death of hundreds of thousands innocent people and displacement" of millions from their lands and homes.

"Turkey, as in the past, today and also in the future, has perseverance and determination to respond to contemptible aspirations against its homeland and any threats to its national interests," he stated.

Ankara will continue to resolutely defend its rights and those of Turkish Cyprus, Bilgiç added.

The move on "so-called license area 5, which was declared unilaterally, ignoring the rights of our country and the Turkish Cypriots, has once again made it clear who is really in favor of inciting tension in the eastern Mediterranean," he stated.