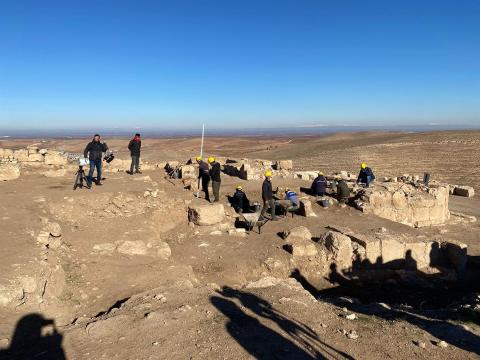 A 1,600-year-old flute and bronze ring with a key have been unearthed during excavations in the 3,000-year-old Zerzevan Castle, located in the Çınar district of Diyarbakır and which served as the last garrison of the Roman Empire in the east. The castle is on the UNESCO World Heritage Tentative List.

Associate Professor Aytaç Coşkun, the head of the excavations, said the flute was important as it showed that the people living in the castle, which was a military settlement, had an interest in art and music.

The historical castle, which is home to the Mithras Temple, is located on an area of 60,000 square meters.

Coşkun said they uncovered very important structures and artifacts during the excavations that have continued since 2014.

Stating that the flute, which was identified to be 1,600 years old, and a ring with a special key were also unearthed during the latest excavations, Coçkun said that the flute, produced by making round holes in the bones of small cattle, is important as it reveals that the people living in the castle have an interest in art and music.