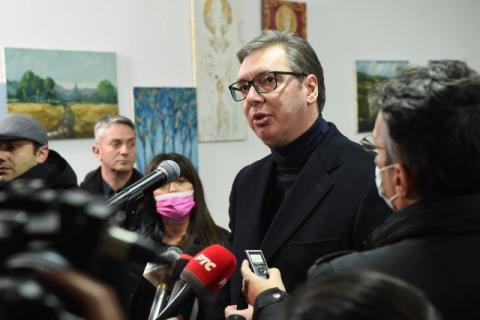 From 3 p.m., President Aleksandar Vucic talked to all interested citizens from the area of 12 villages in the Jadar region. There is the highest level of concern in this area due to research conducted by Rio Tinto.
"We will fight for the relocation of the landfill and tailings, because it should not be situated in the bed of two rivers," the president said, adding that "if it is expensive for them, then let a new investor come."
He appealed to the citizens to keep in mind that "marching the investors out of Serbia is very expensive" and reiterated that "no one from Belgrade will make any decision against their interests." "We will solve the problem pertaining to the law on expropriation in the next seven to eight days".
"These are great things we are doing, and a lot of money has been invested in Podrinje. I am primarily worried about Podrinje because of the demographics. And you all know that those who sold land to Rio Tinto wanted apartments in Belgrade. And when they didn't get them, they rebel. So wait people, you are tied to this here, we all know it is difficult for you. But in the end, you will make the decision on your own, alone and democratically", he said.

Vui: "Either kill me or go to the polls. The street will not lead our politics" Foto: Instagram/buducnostsrbijeav

After talks with the residents of Gornje Nedeljice, President of Serbia, speaking for the media, also referred to the protests that took place in Belgrade.
"Either kill me or go to the polls. The street will not lead our politics," President was clear.