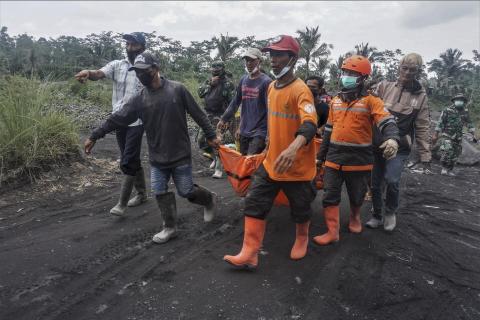 The death toll from a sudden, spectacular eruption of Indonesia's Mount Semeru has risen to 13, disaster officials said on Dec. 5, as rescuers searched villages blanketed in molten ash for survivors.

The eruption of Java's biggest mountain caught locals by surprise on Dec. 4, sending thousands fleeing its path of destruction and forcing hundreds of families into makeshift shelters.

Dramatic footage showed Semeru pumping a mushroom of ash into the sky, looming ominously over screaming residents of a nearby village as they fled.

Two of the victims have been identified, he said in a later statement.

At least 57 people were injured in the eruption, of whom 41 suffered burns and were hospitalized, the BNPB said in a press release.

As many as 10 trapped people were rescued from the surrounding areas in Lumajang, Muhari said, as villagers and rescuers worked through the night to find anyone trapped or retrieve bodies.

There is also a risk of heavy rain causing ash sediment to form a new river of hot lava, the country's top volcanologist Surono told the station.

Lava mixed with debris and...

Indonesia is Moving its Capital