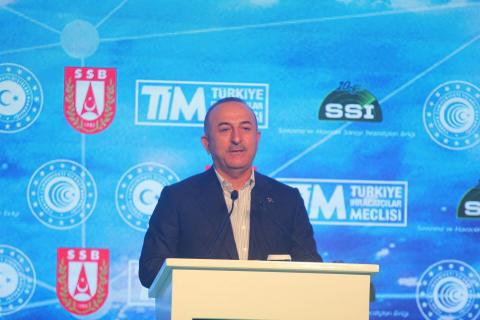 "It is important for Poland to add these products to the inventory of a NATO and EU member for the first time after purchasing SİHAs [armed drones] from our country. Currently, many EU and NATO member countries are interested in our products," Çavuşoğlu said, addressing the Global Strategies in Defense and Aerospace Industry Conference in the southern province of Antalya.

"I don't want to express any name, but we continue our contacts with many countries in this regard," he added.

If a window of opportunity for lasting peace is opening in the region today, the role played by Turkish defense industry products is obvious, he stated.

For its national security, Turkey needs to use its deterrent power together with diplomacy, Çavuşoğlu said, adding, "The greater the deterrent, the lower the risk of war. Deterrence from power serves peace."

Stressing that the industry serves Turkey's efficiency in foreign relations, the minister said the Foreign Ministry decided to establish a defense industry department in a bid to better coordinate efforts in this regard.

Çavuşoğlu noted that a letter of intent regarding the power group (engine and transmission) of the Altay national tank was signed with South Korea during his last visit to Seul.

"We are making our best contribution to the negotiations for the signing of a memorandum of understanding between the Korean Defense Industry and the Turkish Defense Industry Presidency," he added.

Defense Industry President İsmail Demir said, "The image of Turkey has changed in the eyes of other countries. Now an...