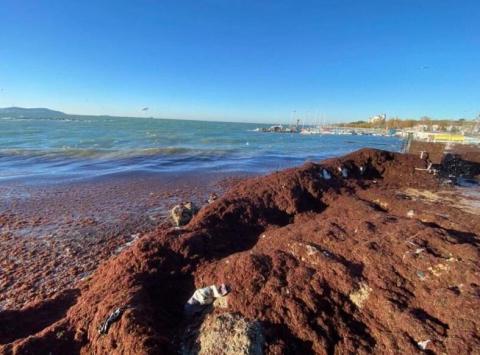 Several spots on the Marmara Sea have been fully covered with red moss following a fierce storm that has wreaked havoc in Turkey's northwestern region.

Municipal teams worked hard to clean up the red moss that hit with giant waves on the shores of Kadıköy and Maltepe, two districts on Istanbul's Anatolian side.

Tons of moss collected with the help of construction equipment were loaded into trucks and sent to waste facilities.

Meriç Albay, former dean of Istanbul University's Faculty of Aquatic Sciences, noted that such a proliferation of algae indicates deterioration in water quality.

"It shows that there is an unwanted amount of nitrogen and phosphorus in the water. It's not a pretty sight. It shows that the water quality of Marmara Sea is not good in terms of water health," he said.

This is not the first disturbing sight that Istanbul's shores have faced this year.

Mucilage, a jelly-like layer of slime that developed due to the excessive proliferation of microscopic plants caused by untreated waste, has covered the surface of the Marmara Sea this summer.

The natural phenomenon was collected as a result of efforts conducted in line with a comprehensive action plan that Turkish authorities announced to clean up the land-surrounded sea.