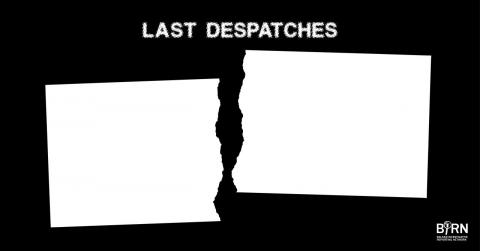 BIRN's exhibition, entitled Last Despatches, will open in Sarajevo on December 14 at a venue that will from next year host BIRN's regional museum, the Reporters' House, dedicated to journalists and media issues, the wars in the former Yugoslavia and challenges to contemporary journalism.

The exhibition is based on BIRN's long-running online series Last Despatches, which tells the stories of journalists and other media workers who were killed during and just after the 1990s wars in the Balkans.

Some of the 155 people who died were foreign correspondents who came to cover the conflicts, but most of them were citizens of the warring republics. Some were killed while reporting from the front lines, while others were gunned down in the streets of their hometowns, or even killed in their own offices.

The exhibition will also serve as the launch for BIRN's new Last Despatches book, which features 20 stories from the series, including the personal recollections of the families, friends and colleagues of those who were killed.

"These stories provide an insight into the work of the media in drafting the first historical accounts of the collapse of federal Yugoslavia," said Marija Ristic, BIRN's regional director.

"But this should not be considered an attempt to describe, document and explain the trajectory of the war - this is a collection of stories about journalists, written by journalists. It is a memorial for lost colleagues and a tribute to their work, but at the same time a reminder that we need free media to build free societies," Ristic added.

The venue for the exhibition in Sarajevo will next year become a new museum and community space, under the current working name of the Reporters' House. It will be the first regional...

Bulgaria allowed a Russian plane to Fly through its Airspace

For Peace Today, Let’s Recall Wartime Yugoslav Feminist Solidarity
‘It’s [Not] Over’: The Past, and Present, of Lithium Mining in Serbia

Film on vanishing Slovenian language in Austria featured in Graz

Secret negotiations with Putin commenced; Main mediator is a woman well-known to us

‘I Wanted to Die’: Kosovo Mothers Haunted by Children’s Massacre