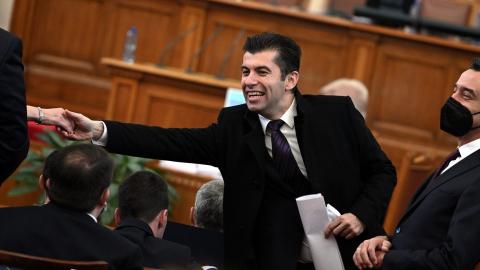 The leader 'We continue the change', Kiril Petkov, welcomes a colleague before the first session of the new parliament in Sofia, December 3, 2021. Photo: EPA-EFE/VASSIL DONEV

"We managed to create a coalition document, which was finalised at midnight," said Petkov, who was caretaker Minister of Economy between May and September in the presidentially-appointed interim cabinet before forming a new centrist option, "We Continue the Change", along with another former caretaker minister, Asen Vassilev.

"Our three coalition partners will return their notes on the coalition agreement we sent to them by tomorrow [Tuesday] afternoon," Petkov added.

"We Continue the Change" surpassed all expectations when it made its election debut in the November 14 general elections - and came first, surprisingly, winning 25.67 per cent of the votes. They were the third elections in Bulgaria in 2021 after two inconclusive elections in April and July.

Later this week, President Rumen Radev will hand a mandate to "We Continue the Change" who are nearing the end of coalition talks with Democratic Bulgaria, "There's Such a People" and the Bulgarian Socialist Party - a politically fragmented group, united mostly by dislike of former PM Boyko Borissov and his GERB party.

The coalition will focus on reforming the country after GERB's more than a decade-long dominance. "We Continue the Change" has reconfirmed its ambition to erase corruption, increase social security and business opportunities, cut the state administration by 30 per cent, revise the state budget, and introduce incentives to lure Bulgarians who went abroad to work back home.

In a bid to show off its transparency, "We Continue the Change" has livestreamed all its meetings in the first week of...

The New Cabinet: DPS will Not Support the “Petkov” Government

The New Cabinet: Everyone in the Council of Ministers with a Green Certificate - Petkov's First Order