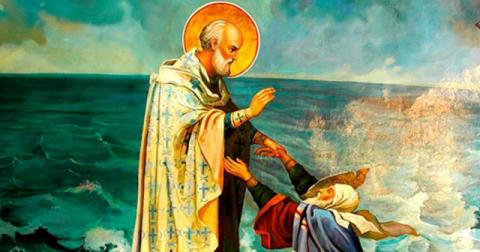 Thousands of Bulgarians have a name day today, sailors and bankers celebrate as well, the Church honors St. Nicholas the Miracle Worker of Myra. St. Nicholas Day is also the day of the Bulgarian city Burgas.

St. Nicholas of Myra was born in 280 in the province of Lycia in Asia Minor and during the reign of Emperor Constantine the Great he was proclaimed Archbishop of Myra. He took part in the First Ecumenical Council of Nicaea. He died in 325. He became famous for his maritime miracles in rescuing ships and sailors from wreck.

The Bulgarians revere the saint as a patron of fishermen and sailors and as a master of the oceans, seas, rivers and lakes. According to legend, St. Nicholas is also the patron saint of bankers. Legend has it that he was a rich man who distributed money to the poor. Unnoticed, he threw three bags of gold at the home of an impoverished merchant so that he could marry his three daughters and save them from dishonesty.

In 1992, the Association of Commercial Banks and the Bulgarian National Bank restored the tradition of celebrating St. Nicholas Day as a holiday for banks and bankers.

On St. Nicholas Day it is obligatory to eat fish, most often carp stuffed with walnuts. The reason: Once, when the saint was swimming with his boat in the sea and the strong waves broke through its bottom, he reached into the water with his hand, caught a carp and plugged the crack with it. He saved his companions from drowning. Since then, the custom of sacrificing carp in honor of the saint has remained.

On St. Nicholas' Day the table full of food is not raised all day. It is believed...