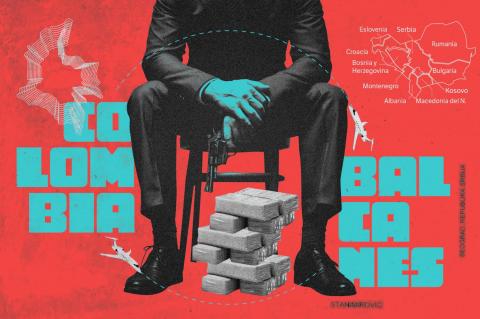 The excitement was understandable. Dairo Antonio Usuga, better known in Colombia as 'Otoniel', was the country's most wanted drug trafficker, a former guerrilla turned leader of El Clan del Golfo, the biggest criminal gang in Colombia.

He was arrested in late October, 500 soldiers and 22 helicopters descending on his rural hideout in northwestern Colombia.

The ripple-effect of Otoniel's downfall, however, will be felt far wider than his South American homeland. Authorities say El Clan del Golfo had alliances with international drug cartels in Mexico, Italy and the Balkans.

The latter connection is no coincidence. Ties between organised crime groups in Colombia and the Balkans go back years, based not just on mutual interest but similar backgrounds and, sometimes, military or paramilitary experience.

So close were the ties that emissaries of the Balkan traffickers would visit Otoniel personally to negotiate terms face-to-face, Colombian authorities say.

"Many [Balkan criminals] had military training in their countries, and they could also belong to paramilitary groups or intelligence agencies," said a Colombian police investigator who spoke on condition of anonymity because he was not authorised to talk to the media.

"Balkan cartels use five-star hotels for meetings, and then spend several days ensconced in the jungle to meet with leaders of Colombian criminal groups," the investigator told BIRN/El Espectador.

As is the way of the criminal underworld, ties between drug traffickers can sometimes turn sour.