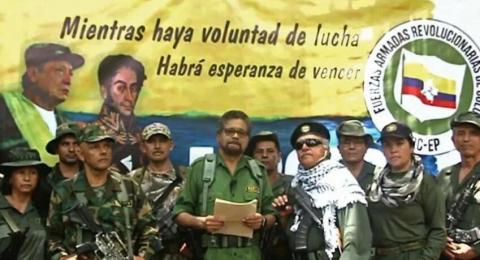 A dissident former leader of the FARC guerrillas was shot dead in Venezuela by other rebels, Colombian media reported on Dec. 5.

Citing Colombian and Venezuelan intelligence sources, several newspapers said Hernan Dario Velasquez, nicknamed "El Paisa" ("The Peasant"), had been ambushed in the state of Apure, on the border with Colombia.

Neither the Colombian nor the Venezuelan government have confirmed the reports. The Colombian military also told the media it had no knowledge of the reported killing.

Feared during his years at the head of an elite armed team in the Revolutionary Armed Forces of Colombia (FARC), Velasquez moved away from the rebel group in 2018, two years after the signing of a peace deal with the Colombian government.

He was infamous for his armed attacks, including a car bombing that killed 36 people and wounded dozens of others in February 2003 in Bogota.

Some 13,000 guerrillas have surrendered their arms since the signing of the peace pact in 2016, and the FARC has since transformed into a minority political party.

Violence nevertheless persists in many regions of Colombia where FARC dissidents, more than 5,000 of whom rejected the deal, continue to fight paramilitary and rebel groups and drug traffickers in the world's largest cocaine-producing country.

Velasquez had been one of the accord negotiators. After leaving the FARC, he reappeared in 2019 alongside former FARC leaders Ivan Marquez and Jesus Santrich to announce he was taking up arms once more.

Bogota has repeatedly accused the Venezuelan government of harboring fighters from the FARC and ELN, another paramilitary group.