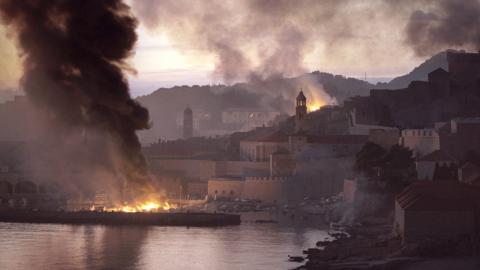 View of the burning city of Dubrovnik, in Croatia, in November 1991, after air raids and artillery attacks by the Yugoslav Army. Photo: EPA/PETER NORTHALL

In a joint statement, the Centre for Civic Education, CGO, Human Rights Action, HRA, and Documenta - Center for Dealing with the Past said prosecuting those responsible for war crimes is a state obligation under both domestic and international law.

"We expect justice to be provided for the victims of war crimes, court proceedings to be initiated and appropriate verdicts to be passed in order for Montenegro to relieve itself of the burden of collective responsibility," the NGOs' joint statement said.

"War crimes prosecution is also an urgent task in the EU accession process and a moral debt to the victims," the NGOs added.

The call for action was published on the 30th anniversary of the bombardment of the Croatian town of Dubrovnik by the Yugoslav People's Army, JNA, on December 6, 1991.

As part of the former Yugoslavia, Montenegro took a direct part in the JNA's wars in Croatia and Bosnia and Herzegovina, although it saw no conflict on its own soil.

The siege of Dubrovnik was the largest military operation in which Montenegrin soldiers were involved.

The JNA war in Croatia was intended to support minority Serbs who had rebelled against Croatia's declaration of independence from Yugoslavia.

Since it regained its independence in 2006 [it was an independent state up to the end of World War I], Montenegro has held just eight trials for war crimes committed in Croatia, Bosnia and Kosovo, and only low-level perpetrators have...