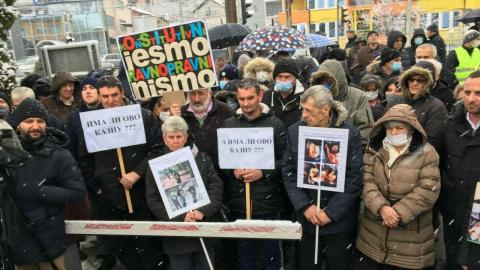 Around a hundred Bosnian Serbs, bussed into Sarajevo under police escort, staged a protest on Tuesday in front of the Bosnian state court and prosecution building, clutching banners and photographs of Serbs killed during the war to protest a perceived neglect for crimes committed against Serbs.

The protest follows the arrest last week of seven Bosnian Serb police officers accused of war crimes in the eastern region of Bijeljina and an appeals verdict in November quashing the conviction of Sakib Mahmuljin, former commander of the Bosnian Army's Third Corps, for failing to stop the torture and killing of Serb prisoners.

"Can any of you tell me when the last Serb war victim was identified? I don't remember," said Veselko Pejic, whose father, Milos Pejic, is still missing from the war. "I'll keep searching for as long as I live."

"We have come here to show our neighbours in Sarajevo and the joint state of Bosnia and Herzegovina that we must work and cooperate in a different way if we want to live in peace and prosperity," said Pejic, from the village of Vozuca some 100 kilometres north of Sarajevo.

Also from Vozuca, Raduska Pavlovic said her son was taken prisoner during the war. "I'm searching for my son, Sladjan, to find him while I'm still alive, to bury him," she said.

Around 100,000 people died in the Bosnian war, the large majority of them Muslim Bosniaks. Some 7,603 are still classified as missing. The predominantly Serb-populated Republika Srpska says 1,652 people from its entity are still missing.

Some Serbs argue that the justice system is biased against them, a claim Bosnian state authorities reject.

"How come we have heroes on one side and criminals on the other?" said Andjelko Nosovic, president of the...