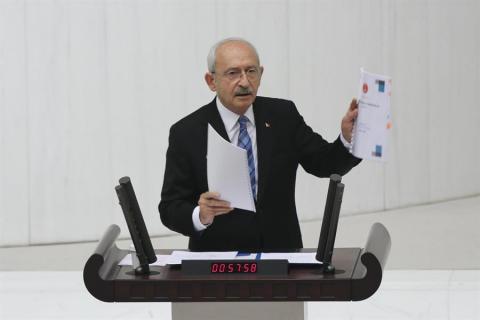 Main opposition Republican People's Party (CHP) leader Kemal Kılıçdaroğlu on Dec. 6 said the government's 2022 budget submitted to the parliament vote is a "conspiracy budget" and his party will vote against it.

"We will say no to this budget," he said, addressing the parliament during the budget talks.

Criticizing the government's policy of keeping the interest low, Klıçdaroğlu said, "Which interest? Did you reset the farmers' interest?" he asked.

"Go to any grocery store. Let the grocery store say, 'What TÜİK says is true, I swear I will quit politics," he said.

If the reports of the Court of Accounts, which audits on behalf of the parliament, are being "changed, it means that the executive body has something to fear," Kılıçdaroğlu stated.

The government does not want the truth to be seen by doing so, he said.
The report of the Court of Accounts is more than 100 pages, he said and claimed that there are many corruption cases, but the report has only 0 pages on...