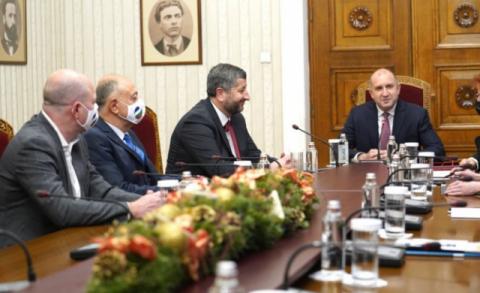 "Democratic Bulgaria" arrived for consultations with President Rumen Radev on forming a government.

With their vote for you, the Bulgarian citizens have proved that they want protection of the rule of law. You have a responsibility to maintain consistency in upholding the rule of law. The two caretaker governments I appointed have not only stabilized the country, they have created a good basis for future cooperation that has overcome the negatives of the past. This is the main criterion by which citizens will give or take away trust, said President Radev.

The co-chairman of the DB Hristo Ivanov said that he hoped that this time there would be success for the election of management. After the third election, it seems unalterable. The question is how to make it work afterwards. This government provides the country with the crucial opportunity to initiate change. It is very important that the first characteristic of the majority is that it will be able to function independently, without DPS and GERB, which are carriers of the corruption virus. He again called for a restart of the prosecution, which will require larger majorities. The DB will work for a constitutional change in this direction, said Hristo Ivanov.

Atanas Atanasov commented on the security sector, saying it was a good step to replace the heads of services, but added that there were some mistakes. As such, he pointed out the Secretary General of the Ministry of Interior.

The President commented that the Ministry of Interior had managed to break the "purchased" vote on elections, which is a serious achievement. Problems where they are systemic must find a solution, Radev said.

The consultations started at 9.00 am with...