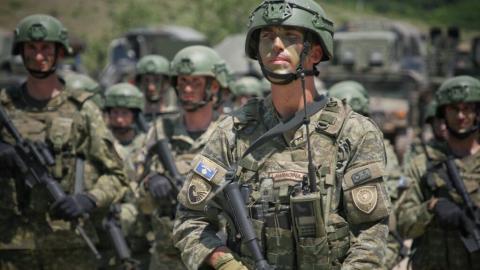 With Europe and the United States increasingly concerned over a buildup of Russian troops near the border with Ukraine, some Balkan countries are already offering their services in any potential US-led response to a possible Russian invasion.

US President Joe Biden and his Russian counterpart Vladimir Putin were due to talk on Tuesday; Ursula Von der Leyen, the president of the European Commission, warned that any Russian "aggression" against Ukraine would not go unanswered.

"We will respond to any further aggressions by scaling-up and expanding existing sanctions," Von der Leyen said.

While the US and NATO look unlikely to mount a major military response to a possible Russian invasion of Ukraine, Kosovo's defence ministry said it stood ready to help anyway.

"The US, as our main and irreplaceable strategic ally, knows best the operational capabilities and capacities of the Kosovo Security Forces, and if they assess that our capacities can be engaged, as we have always pledged, we will be ready to be alongside them in any operation in the service of regional peace, security and stability," the ministry said in a written response to BIRN, noting that the Kosovo force had "actively participated" with NATO in the evacuation of refugees from Afghanistan.

"Wherever the US is, there is Kosovo!" the ministry said.

Kosovo is not a member of NATO, in part because four of the Western alliance's 30 member states - Romania, Spain, Slovakia and Greece - do not recognise the former Serbian province as independent. Nor does Ukraine.

Albania, which joined NATO in 2009, has also hinted it would ready to take part in any future NATO mission in Ukraine.

"Albania's Armed Forces will support any decision the US and NATO take,"...

9 Countries, including Bulgaria, will ask for Help from the EU for the Refugees from Ukraine