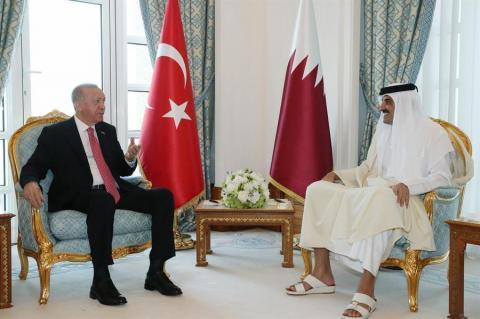 Turkey and Qatar Dec. 7 signed 15 agreements, including in various fields such as military, health, tourism, and education, to enhance bilateral cooperation between the two countries during a visit of President Recep Tayyip Erdoğan to Doha.

Also, the governors of the Qatari Central Bank and Turkey's Central bank had a meeting in Doha.

After the meeting of the two leaders, several agreements on the fields of trade, investment, development, culture, youth, sports, diplomacy, health, religious affairs and media cooperation were signed.

A Memorandum of Understanding between the interior ministries, Disaster and Emergency Management Presidency (AFAD) and the General Directorate of Civil Defense of the Ministry of Interior of the State of Qatar on the "Field of Disaster and Emergency Management" and a protocol for the implementation of the letter of intent between the Turkish and Qatari governments on "Cooperation in the Fulfillment of Large-scale Organizations" were signed by Interior Minister Süleyman Soylu and Qatari Prime Minister and Interior Minister Sheikh Khalid bin Khalifa bin Abdulaziz Al Thani.

Foreign Minister Mevlüt Çavuşoğlu and Qatar's Deputy Prime Minister and Foreign Minister Muhammed bin Abdurrahman Al Thani signed a letter of intent to establish institutional cooperation between the "Antalya Diplomacy Forum and Doha Forum," Memorandum of Understanding on "Cooperation in the Field of Protocol" and "Joint Statement of the Seventh Meeting of the High Strategic Committee."