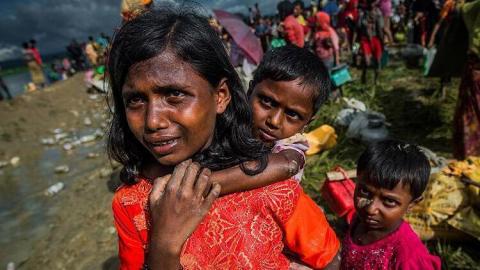 Rohingya refugees sued Facebook on Dec. 6 for $150 billion over claims the social network is failing to stem hate speech on its platform, exacerbating violence against the vulnerable minority.

The complaint, lodged in a California court, says the algorithms that power the U.S.-based company promote disinformation and extremist thought that translates to real-world violence.

"The undeniable reality is that Facebook's growth, fueled by hate, division, and misinformation, has left hundreds of thousands of devastated Rohingya lives in its wake."

The mainly Muslim group faces widespread discrimination in Myanmar, where they are despised as interlopers despite having lived in the country for generations.

A military-backed campaign that the United Nations said amounted to genocide saw hundreds of thousands of Rohingya driven across the border into Bangladesh in 2017, where they have since lived in sprawling refugee camps.

Many others remain in Myanmar, where they are not permitted citizenship and are subject to communal violence, as well as official discrimination by the ruling military junta.

The legal complaint argues that Facebook's algorithms drive susceptible users to join ever-more extreme groups, a situation that is "open to exploitation by autocratic politicians and regimes."

Rights groups have long charged that Facebook does not do enough to prevent the spread of disinformation and misinformation online.

Critics say even when alerted to hate speech on its platform, the company fails to act.

They charge that the social media giant allows falsehoods to proliferate, affecting the lives of minorities...

Controversial project that may have harmed Ottoman cemetery halted