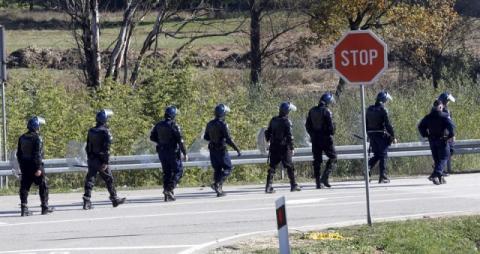 This was announced by the Rosa Luxemburg Foundation in Belgrade at a press conference.
The representative of that foundation for Southeast Europe, Vladan Jeremic, pointed out that collective expulsions, abuse and arbitrary arrests take place along the Serbian-Croatian border from 2016 to 2021, despite the efforts of civil society organizations to prevent it from happening.
The Croatian side denies allegations of inhumane treatment of migrants. Jeremic said that the Foundation, otherwise close to the German Left, supported the work of the author Nikola Kovacevic "Documenting Violations of Rights on the Border between Serbia and Croatia: Guidelines for Reporting, Advocacy and Strategic Advocacy", published this year.
According to Jeremic, the goal of Kovacevic's publication was to provide guidelines to civil society organizations on where, how and when to document and legally oppose illegal border practices along the Serb-Croatian border, Jeremic said.
Violent behavior does not happen in cooperation with the Serbian police, but outside the border crossings, with beatings, humiliation, theft of valuables and threats with weapons, said Milica vabi from the Belgrade Center for Social Policy Development - Klikaktiv.
She pointed out that there are about 1.700 refugees in the three official migrant camps in id, and there are significantly more of them in abandoned buildings and tents in the forest and in the surroundings, that is.
Klikaktiv estimates that there are about 4.000 of them, including unaccompanied families and minors, who try to cross the border almost every day, exposing themselves to forced expulsion. According to "Veernji", this practice of illegal and violent expulsions of refugees from the territory of Croatia is still...