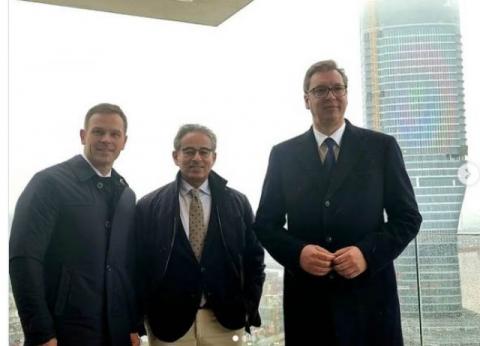 After touring Belgrade Waterfront, he answered a journalist's question whether he was allegedly negotiating a working group with Interior Minister Aleksandar Vulin.
"I have no idea what this is about, I hear it for the first time, but I see that you are cheering for a colored revolution. I am not afraid of anything, especially that someone is judging my work badly, and history and people will judge me, not the streets, especially not when someone from outside manages political processes", stated Vui and reminded that there will be elections in three months.
"We had demonstrations for a year because we turned the worst place into the most beautiful place in Belgrade, I deal with real life, citizens' problems and how to solve them with these environmental problems," he added after visiting the final works on the BW Terraces building on the facade of the Belgrade Tower.

The closure of highways cannot be in accordance with the law

Speaking about the protests over the weekend, he asked how he could send the police to do something that is illegal.
"They say we didn't send the police to make an incident. How do we send the police to take part in something that is illegal? Common, concentrate a little bit. You attacked us a week ago because the police were doing their job, now they haven't come out," President of Serbia said.
"The closure of highways cannot be in accordance with the law. It only shows what this has to do with anything. There is a significant number of people who care about the environment. We will have to address these people and talk to them," he added.
He said that the same people appear at different events, and "their coats are better because their salaries have increased."
Vui points out that this is...