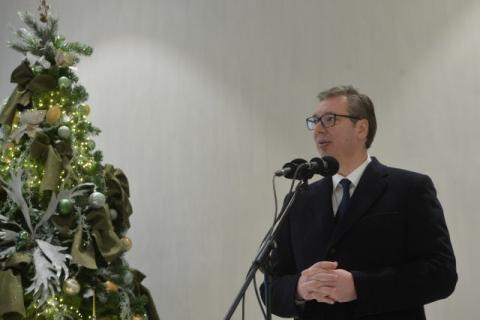 Vui said that it was clear to him that no agreement could be reached in the next ten months on what the law should look like.
"Let all those who think what it should look like agree in the future. It is our job to see that the law be excluded from legal transactions and look for a way to adjust it with the Constitution of Serbia," Vucic told reporters after visiting the final works on the construction of the BW Terraces building and on the facade of the "Belgrade" Tower.
Asked whether they are discussing changing the part of the law that refers to payment and whether the market value will be paid only to those whose property is registered, Vui said that such solutions are not sought because, as he says, it is impossible to achieve agreement.
"How can we pay for illegal facilities? We are not looking for such solutions, because it is impossible to agree on that. When the times come when impossible solutions become normal, then it is better not to talk about it," Vucic said, reiterating that by Thursday at the latest, he will come out with a solution.
President announced that a decision will be made on Thursday on how much money will be allocated for environmental protection, which, he says, is very important.