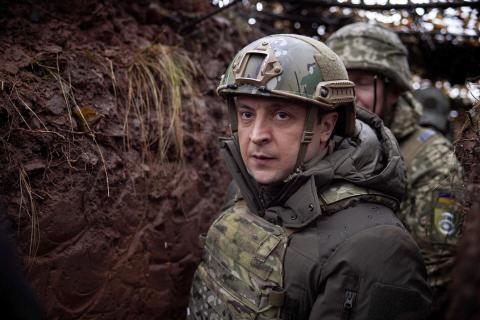 The leaders of France, Germany, Italy, Britain and the United States expressed "determination" during a phone call on Dec. 6 that Ukraine's sovereignty should be respected, the French presidency said.

While Russia is accused of preparing an attack on its neighbour, the leaders also "expressed their commitment to act to maintain peace and security in Europe", the office of French President Emmanuel Macron said following the call.

The leaders all stressed the need for Russia to re-engage in negotiations with Ukraine, as part of the "Normandy Four" group under the aegis of France and Germany, Macron's office said.

The diplomatic coordination on Ukraine comes on the eve of a long-awaited videoconference between U.S. President Joe Biden and Russian leader Vladimir Putin on the subject and after a warning earlier Monday from the White House that Washington was ready to act against Moscow in the event of aggression against Ukraine.

The United States was ready to boost its military presence in Eastern Europe should Moscow invade Ukraine, the White House warned.

In a sign of the heightened tensions with Moscow, Ukraine's President Volodymyr Zelensky visited the country's eastern frontline on Monday where Kiev has been fighting pro-Russia separatists since 2014.

A senior U.S. official told the Washington Post on Friday that Russia was preparing to launch an offensive in early 2022 involving up to 175,000 troops.