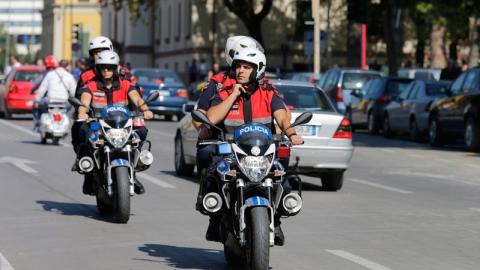 Albania has launched a police drug-testing process, to be applied in all local and central police directorates, for the first time.

An existing Regulation on the State Police says no one can become a police officer unless they first pass a drug test.

But, apart from that initial test to qualify as a police officer, this is the first time that officers as a whole are facing mass testing, after starting work.

Some experts say the process should have started earlier. Every police officer has the right to complain if he does not accept the test result.

Sadetin Fishta, head of Albania's Police Union, said the tests are required by law and should have begun before.

"The police regulation stipulates that for admission to the police, one of the criteria is a negative drug test result," he told BIRN.

"But the law was never implemented until the Order of the Director of Police came out. The issue of the order is in accordance with the law, despite being issued late. It should have started with the entry into force of the State Police Regulation," he added.

Having police officers that use drugs damages the image of the police and makes the fight against crime and organised crime more difficult, Fishta noted.

In Albania, using drugs is not illegal, but their cultivation, sale and and transport is. Using drugs also means buying them, so police having a relationship with sellers are committing a crime.

"The police have a duty to implement the law. One of their tasks is to catch, prosecute and track down the criminal elements that deal with the sale, cultivation and transportation of narcotics, so when the police use drugs, they become accomplices to the crime [when buying them]," he said.