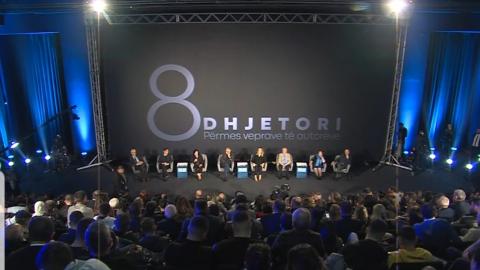 While Rama reminded people that Tirana will be "European Capital of Youth" next year, Basha more gloomily sought forgiveness for "all our responsibilities, our mistakes and our faults, that have enabled this [Socialist] regime to return Albania in many aspects to the level of suffering it was in 31 years ago" - referencing the fall of the brutal communist regime in December 1990.

"December 8 1990 is the day that separated the past from the future and changed the history of Albania forever," Basha added.

Rama, more optimistically, predicted that, "In 2022, Tirana will be the European Capital of Youth", adding on Facebook: "I wish you a beautiful day."

The title of European Youth Capital is awarded each year by the European Youth Forum and is designed to empower young people, boost youth participation and strengthen European identity. The current holder of the title is Klaipeda, Lithuania. Tirana will be followed in 2023 by Lublin, Poland.

Albanians, meanwhile, mark December 8 each year not only as youth day but as the day in 1990 when Albanians demanded regime change after around 50 years of communism.

On December 8, 1990, students in Tirana started to protest against the communist system, and the movement rapidly lead to more massive protests and quickly to regime change.

The demonstrations of December 1990, also called the "December Movement", started as a protest about energy shortages, but soon other people joined in, and the focus shifted to demanding political change.

Albanians had endured a harsh...