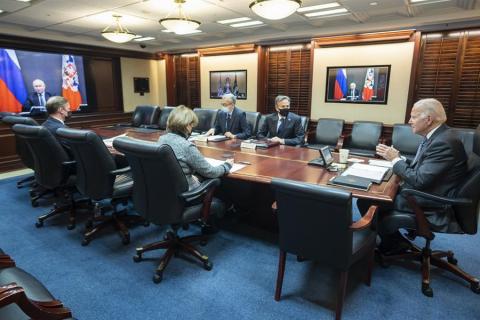 President Joe Biden and Vladimir Putin were still far apart after two hours of talks on the escalating crisis caused by Russia's massing of tens of thousands of troops near its border with Ukraine.

Biden delivered a simple message during Tuesday's video call with Putin: invade Ukraine again and face painful sanctions that will do resounding harm to your economy. Putin had his own blunt take, according to his foreign adviser Yuri Ushakov, telling the U.S. president that "the Russian troops are on their own territory, and they don't threaten anyone."

With no immediate breakthrough to ease tensions on the Ukraine question, the U.S. emphasized a need for diplomacy and de-escalation, while issuing stern threats to Russia about the high costs of a military incursion.
Biden "told President Putin directly that if Russia further invades Ukraine, the United States and our European allies would respond with strong economic measures," U.S. National Security Adviser Jake Sullivan said. He added that Biden said the U.S. would also "provide additional defensive material to the Ukrainians . and we would fortify our NATO allies on the eastern flank with additional capabilities in response to such an escalation."

White House officials made clear that Biden is not interested in putting U.S. troops in harm's way defending Ukraine. But Sullivan added that potential efforts to bolster regional allies could lead to additional deployments of U.S. troops to eastern European NATO allies.

A top U.S. envoy, Victoria Nuland, said a Russian invasion of Ukraine would also jeopardize a controversial pipeline between Russia and Germany known as Nord Stream 2. She told the Senate Foreign Relations Committee on Tuesday that if Russia invaded, "our expectation is...