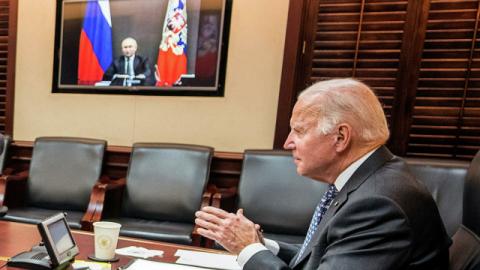 US President Joe Biden and Russian President Vladimir Putin talked for about two hours on a secure video link on Tuesday amid escalating tensions between Russia and Ukraine, world media reported.

Biden also reaffirmed his support for Ukraine's sovereignty and territorial integrity and called for de-escalation and a return to diplomacy, the statement said.

Putin entered the meeting seeking assurances from Biden that NATO would never expand to include Ukraine, which has long sought membership, the Associated Press reported. The Americans and their NATO allies had said in advance that Putin's request was not a good start, the agency recalled.

Putin has called for the responsibility for the escalation of the situation around Ukraine not to be shifted "on the shoulders of Russia", the Kremlin's press service reported, quoted by TASS.

The statement notes that the problems related to the internal Ukrainian crisis and the lack of progress in the implementation of the 2015 Minsk Agreements, which are the indisputable basis for its peaceful settlement, have dominated the conversation.

"The Russian president illustrated with concrete examples the destructive line of Kiev, aimed at the complete dismantling of the Minsk agreements and the agreements reached in the Normandy format, expressed serious concern about Kiev's provocative actions against Donbass," the press service said.