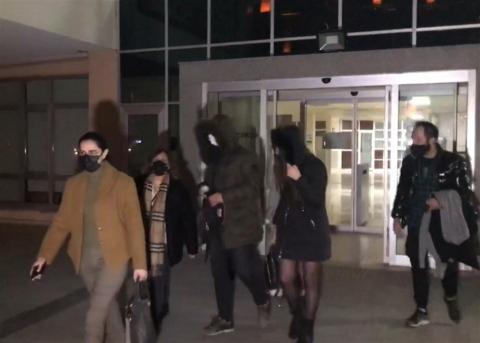 A Greek police officer who was detained in Turkey's northwestern province of Edirne on Dec. 5 has been released by a local court with a ban on traveling abroad as authorities continue to sweep their mobile phones.

Valasoudis Manolis, a 41-year-old police officer serving at the Alexandroupolis (Dedeağaç) Police Station and his girlfriend, Aheni Aohna, were apprehended while returning from a day trip from the Turkish border city.

The couple was later taken to a prosecutor's office after being detained by the gendarmerie forces on charges of trespassing on the military forbidden zone.

During his questioning, Manolis said they came to Turkey for leisure purposes and they shopped during their time in Edirne but they entered a wrong route on the way back as a result of a direction given by a navigation device.

"Soldiers stopped us near the border while we were following the navigation route, confiscating our passports and taking us to the gendarmerie. We came here to shop. We have no other purpose," he reportedly said.

Following the investigations at the prosecutor's office, the couple, who were brought to a criminal court of peace, were released with a travel ban.

The couple then left the courthouse with a group of officials of the Greek Consulate-General in Edirne.

The Demirören News Agency reported that the investigation of the confiscated mobile phones and other materials found on the duo is continuing.