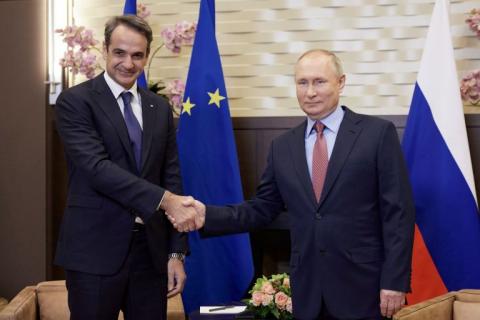 The private meeting of the Greek Prime Minister, Mr. Kyriakos Mitsotakis, with the President of the Russian Federation, Mr. Vladimir Putin, at the residence of the Russian President, in Sochi, Russia, is ongoing for about 30 minutes now.

During his reception by Mr. Vladimir Putin, the Greek PM stressed that "there is room for improvement in Greek-Russian relations in the  sectors of economy, bilateral trade and tourism."

Mr. Kyriakos Mitsotakis described 2021 as the year of the "Greek-Russian History", as a trigger for closer cooperation at all levels, while sending, also, the message that the Greek economy is growing at a very fast pace, as the pandemic is coming to an end.

The Greek PM referred, also, to the really important role of Russia in regional developments in its capacity as a permanent member of the Security Council, so as to emphasize that during their meeting they will have the opportunity to exchange views on regional security issues.

Kyriakos Mitsotakis did not forget to praise Russia's contribution to the success of the goals of the Greek Revolution in1821 on the occasion of the completion of 200 years since its beginning, while he said he was happy to visit Sochi, home of many Russians of Greek origin. In fact, the Greek Prime Minister reminded Mr. Putin that he first visited Sochi 30 years ago, when he accompanied his late father and then Prime Minister, Mr. Konstantinos Mitsotakis.

The Russian President, for his part, emphasized the special ties and relations between the two countries, noting that the year of the "Russian-Greek History" coincided with the 200th anniversary of the Greek War of Independence, during which, as he said, Russia contributed to the fulfillment of the aspirations of the Greek people.